NEW RETURN OF THE CONDOR HERO

Nope.. they not going to change that part.... they already filmed that part. the rape, well it's not really rape.. since the main girl thinks it's the pra aik that is doing that to her. yeah.. that was one of the first parts that they filmed... the main guy used to be hott, but they made him so ugly! the costume and the hair is really messed up! but i see that the actions and kung fu sequences are great... :loool:

Andy and Louis Koo looked really cute as the star guy, but the 3rd one hmmm, still trying to peek at his face because his freakin hair is always in the way. Wish I can see a better pic of him where he's actually uhhh clean i guess oh yeah and tamed hair hehe
D

I think that LYF only matches the role of Ling-Er in Chinese Paladin... otherwise I don't like her in other movies... I bought a Hmong dubbed version of "Heaven Dragon Sword" or whatever and like some of you said- she didin't really seem like she was into it...
L

This new version doesn't looks attractive like the older version. I still find the old version with Andy Lau the best!
W

To be honest...I don't like her a bit...she only have one expression on her face...how do you know when she sad, when she's happy...the only version i like is wiht Louis and Carmen, Louis walk into my life when return of condors heros 95 came out...i never like the other version...
N

wintr said:
To be honest...I don't like her a bit...she only have one expression on her face...how do you know when she sad, when she's happy...the only version i like is wiht Louis and Carmen, Louis walk into my life when return of condors heros 95 came out...i never like the other version...

yea...i agree...this girl is pretty but she only have one face expression....louis and carmen's version is the best.....now its makes me want to watch it again....louis is so hot in there......

the original is always the best
M

I love andy and Louis Koo version. I have the copy of Louis version and I watch over and over again..I love it. Original always the best, but I'm looking forward to see this new ROCH. I love the secenary they have in the new one and looking forward to see Yang Guo and XLN their love relationship. by looking at the picture and MV their relationship are shown more and develope more than the previous verisons. Hope they have alot of romatic scene.
W

i agree with u Menia...it scenery is beautiful...maybe when it comes out ill watch it n see how it goes...i love watching series for the scenery..
K 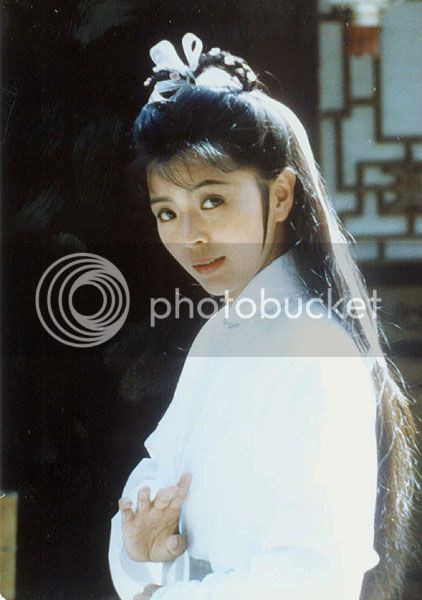 i don't know if anyone of you have read this..but just sharing it in here...all credit goes to asiafanatic

(VietNamNet) After the success of â€œTian Long Ba Bau,â€? the series â€œReturn of the Condor Heroesâ€? is especially attracting the publicâ€™s interest. Director Vu Man can finally take a deep breath and relax after completing the 42-episode adaptation.

The entire series, including the hardest and the final scenes to be filmed, are finally finished. What is left are the music and the graphics (with the help of computer technology).

Unlike ZJZ, who would always compliment his actors, Vu Man has a more realistic evaluation on the two starsâ€™ performance: YG-HXM and XLN-LYF. He rarely even compliments them, and the closest most possible complimentary remark he could make is â€œNot bad!â€? â€œIn this â€˜ROCH,â€™ there arenâ€™t many superstars. In fact, candidates for the auditioning roles were quite limited. And so I can only evaluate the two most important actors which are HXM and LYF. As the executive director, I can say that they have completed their mission.â€?

VM had actually watched the previous adaptations of ROCH before. Louis Koo was also â€œnot bad,â€? but HXM presented a bit more â€œevil-spiritedâ€? characteristic in his performance. â€œHonestly, in all of the other ROCH versions, YG appeared to be a righteous person, but this character should have a bit of strangeness or wickedness in him. I see that HXM has grasped it pretty well in that area.â€?

As for XLN-LYF, VMâ€™s attitude was very ambiguous or unclear. â€œI can only say that in this series, she has improved immensely compared to any other series she had done in the past. There were quite a few scenes where she truly did give an excellent performance in. I was not impressed much with the first couple of scenes that she did. But from the middle and thereon after, she finally caught on.â€?

VM had even admitted that while filming, the crew had many severe arguments regarding the actress that played XLN. â€œI just regret not asking her to redo some of the scenes in the beginning of the series. But sheâ€™s still just an 18 year-old girl, after all. Yet she was able to give a performance like that, so not bad at all.â€? 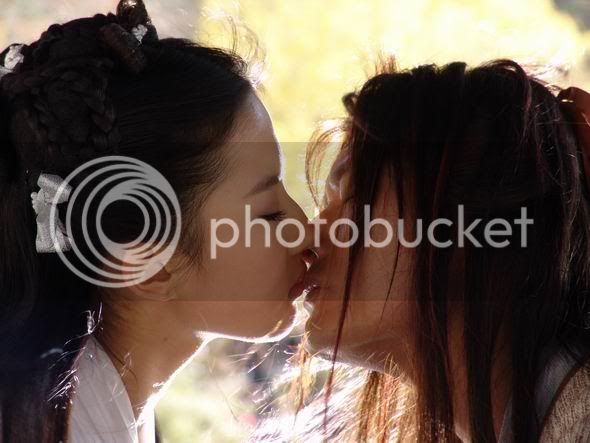 From XAJH to TLBB, three big adaptations, one similar plot. The most difficult task that made ROCH crew ponder (even in their sleep) was how to create a new atmosphere for the audience to see and be curious about.

VM had straightforwardly admitted that their hardest problem was how to incorporate computer technology into making the â€œdancesâ€? a more finished product. â€œI invited the top 10 notable companies in China to come up with a possible suggestion, but none of their campaign plans had satisfied our demands.â€?

VM had arrived as the â€œsaviorâ€? in all three JY adaptations before this one. â€œCompared to all the other series Iâ€™ve directed, I prefer a longer series with an atmosphere that can stretch out the plot even further. But I realized that there are many areas in ROCH that cannot accomplish this.â€?

On account of the backgrounds and lightings, we have chosen fresh lively colors. We take designing and preparing the film set into careful consideration. I feel that scenes with the Ancient Tomb and Jue Qing Valley will outscore previous versions and become the new masterpiece in settings. There were many scenes that resembled a play on stage, enriched with colors, poetry and art.â€?

When asked about MGM & her role as Li Mo Chou in ZJZâ€™s ROCH, MGM was full of excitement. â€œBack then, a friend of mine made a bet that if someone would actually choose me to be in their ancient or wuxia series, then heâ€™d let me use his head as a soccer ball.â€?

To MGM, taking on a difficult role such as LMC-- who is one of the main villainous characters in the story-- is a new challenge. A few days earlier, while MQM was acting out a fighting scene, she was injured with her weapon attached to the side of her costume. All of a sudden, she felt these warm wet droplets fall slowly down the sides of her cheeks. The interviewer asked: â€œBlood?â€? MGM laughed and answered: â€œTears!!!â€?

MGM made a generalization that all of the previous roles that sheâ€™d done were antagonists or villains. â€œPerhaps it is because of my sharp structured face that makes me look vicious enough to pass for evil characters.â€? Focusing on Li Mo Chou, MGM hopes that after she has completed her part for the series, people will want to kill her because that proves that she has succeeded.

In all of ZJZâ€™s adaptations, there is always this one minor character that just shines. For example, Mai Sieu Phong in LOCH, or Hu Truc in TLBB. Next, ZJZ believes that MGMâ€™s LMC is the one.

â€œLi Mou Chou is stubborn and arrogant. When her love was forsaken, she became cold-hearted and ruthless. She hated every single man in the world. In my mind, Li Mou Chou is a very special character with many interesting personalities. The actress that will be playing Li Mou Chou must be very very pretty, her body must be very tall. I was not able to find a person compatible for this character until I went driving one day out in the streets and oversaw this ad with MGM in it. Suddenly, my inspiration sparked rapidly. I felt that she was perfect. At that time, I didnâ€™t know who she was until I saw her on a television network program. And then, I quickly tried to contact her.â€?

Still, MGMâ€™s performance during filming was not satisfying enough for ZJZ. â€œWhen MGM was acting out her character, she was still missing a bit of cruelty. I wish that she could be a little more merciless like how the character should be.â€?

Huang Xiao Ming: Slowly Getting the Taste of â€œROCHâ€?

The Heroâ€™s Life is Tough

It is possible to say that YG, under JYâ€™s pen, encounters thousands of misfortune, torture, and misery. In the end, he is still this one-armed hero. Working in ROCH was tough for HXM. He leaves early in the morning, comes back late at night, and so he takes every chance he can get for a little shut-eyeâ€”which is rare. Each day, the filming process takes up three recording equipments, the constant running back and forth of places to shoot (for filming), mixing day and night with acting, and really no place to rest. These â€œtoughiesâ€? awarded â€œHero-YGâ€™â€? HXM the title â€œGod of War,â€? etc.

The crew laughed and said â€œHXM has put in a lot of effort to finish his â€˜major [exit] requirementsâ€™ but there is still a dozen of other â€˜additional homework assignmentsâ€™ waiting for him. The â€˜homeworkâ€™ had been assigned to him since ROCH started filming: there would always be this large number of ecstatic fans gathered around the set waiting for him everyday, asking for his autograph and to have pictures taken with him. No matter where he is, whether itâ€™s the film set or right in front of the doorstep to his hotel room, HXM is always happy to sign autographs and have pictures taken. Whenever the staff would try to contain the large crowd, HXM would usually say â€˜thatâ€™s ok, thatâ€™s ok, Iâ€™ll sign all of it; theyâ€™ve waited long enough already.â€™ Whenever heâ€™d arrive back to the hotel, he would have to sign all of these case files brought by his assistant before washing off his makeup. HXM would joke about it sometime saying â€˜Right now, Iâ€™m being a teacher who fixes and grades his studentsâ€™ work, everyday.' "

Huang Xiao Ming will sing the song Shuang Fei together with Ding Dang (a new singer).

Jiao Zhu and the composer on the recording days

Since I haven't finished the article, I'll post pictures instead to make up for loss time. Perhaps you've seen some of these already, but better than nothing. Sources are from www.52yifei.com, baidu.com, sina.com, huangxiaoming.com

These are with Jin Yong 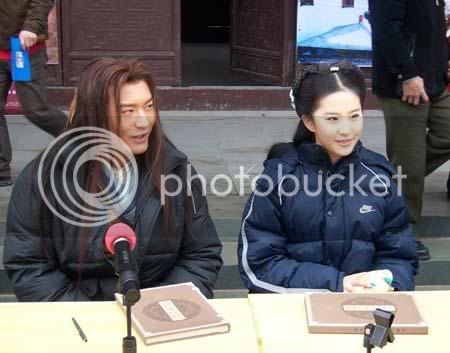 In the novel, it should be xln look younger than yg. maybe this is the reason of them choosing lyf i guess.

The children of gao jing and wong yung