@@ Son&Pat again?! If they pick up a p'ek from another channel they would pick someone not Son...
I know Son&Pat is promoting as koojin but I want Pat to pair up with someone else, like Push(I know he has tons of  project now though @@), or like Jespipat...

i love this pair but i rather they have lakorn with some other company why it has to be Who&Who again, I want to see them work with like sample
Broadcast,Tv Scene or the makers teams

Sukialen said:
News credit Komchadluek
If nongthing changes they will start end of this year
From Khun Kai
Click to expand...

Woah, these two again and the same company?!
B

Has son&pat as a pair worked with other companies yet?
S

Son and Pat are Khun Kai`s favo, And if I am Khun Kai I will chose these 2 and thier Lakorns arenot bad.
Throught khun Kai Son is better an actor now. Thx him. And their Ratings are good , too. And when other Company dont ask him is not his foul ^^´´
But I would like to see Son with other an actresses , too. Likes Teaw..... or Yam .....
M

Poor Pat is stuck with Son for the rest of her career. That's why I don't like this whole koo jin thing. It limits an actor's ability. Pat seems most comfortable with Son compared to other actors. That's going to come back to bite her because when she works with someone new, she'll have a difficult time adjusting since she is used to her comfort zone.
N

Again?! I thought he said he wouldn't cast these two together for more then two lakorns!

Pe Kai did ashed Push from OneHD or Exact channel, but Push has many projects so he turned down Pe Kai's offer.

Pat is comfortable with Son because they already had two lakorns together and he also graduated from the same university that Pat is attending right now.
M

Pat even gave an interview where she said that she had a difficult time playing Anna in Lom Sorn Ruk because the role was too mature for her. She was also a bit nervous around Nadech. If she had starred with others beside Son, maybe she wouldn't be so nervous when playing with someone new. Son's been with her since the beginning of her acting career. She's probably used to his acting style, which isn't the best in my opinion. I think she should branch out and pair with others as well so she can get used to different styles of acting.

The problem is Pe Kai always reserve her with Son so Pat's queue is not available for other producers to consider just like Anne couldn't get Nadech or Yaya to act in her production.

I have not seen either of Son & Pat's previous pairings, but are they that good together? Three lakorns seems like a lot for a pairing that to me does not get enough buzz to warrant it. I really wish if Ch.3 continues to use Son they pair him with someone new. Yaya, Kim, Mint, Pream, Bella...anyone else really lol. Patricia should also pair with new people. I don't mind koojin because I think when a pairing is super cute it is good to see them again from time to time but not ALL THE TIME.

Wasn't Mew and Willy P'Kai's go-to couple back in the day? If so I think he wants a new go-to couple for his company in this generation. However Son and Pat do have pretty good chemistry.

I hope his style is a lot better in here, couldn't stand the way he looked in the last one.

Ncmeowmeow35 said:
I hope his style is a lot better in here, couldn't stand the way he looked in the last one.
Click to expand...

Bas on new novel of Linin who is new writer. 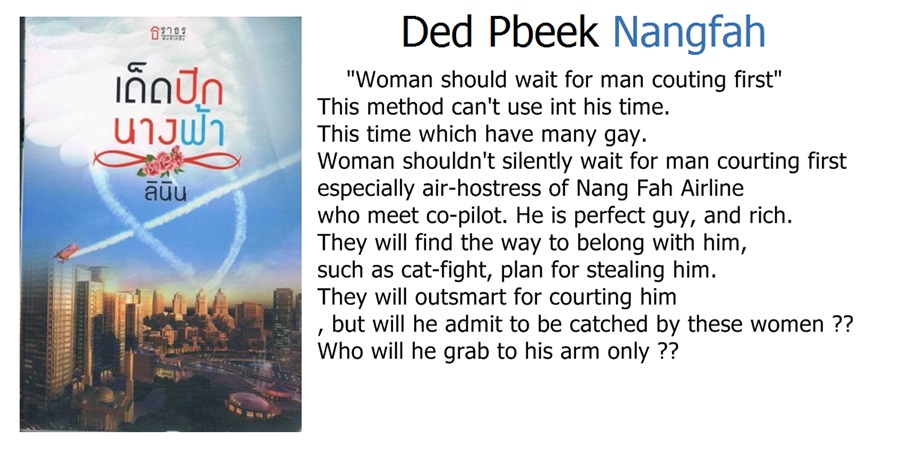 Cupid Candy said:
Wasn't Mew and Willy P'Kai's go-to couple back in the day? If so I think he wants a new go-to couple for his company in this generation. However Son and Pat do have pretty good chemistry.
Click to expand...

Hmm maybe I'll check out one of their lakorns then. Which of their two would you recommend?

Fans at Pantip are complaining that this third collaboration is too soon. They want Push and Pat or Son with another actress.

Hahah. This third collaboration is not due to koojin demand; it's P'Kai. The media loves to throw the koojin word around, but from what I've seen, Son and Pat, after being in two lakorns together in one of the most exposed and PR channel in Thailand back to back don't have that big of a fanbase together nor demand. Sure, they have fans who adore them and support them but if we were to base it on numbers, SonPat are even behind LekJoy. Hahah.

But it's P'Kai who is building SonPat into a koojin. I mean, look at Grate and Matt, I wouldn't consider them koojin. It's just that they've been in so many lakorns together per demand or not, it's just oh, okay, I guess. Hehe.
You must log in or register to reply here.
Share:
Facebook Twitter Reddit Pinterest Tumblr WhatsApp Email Link
Top