James Jirayu starred in the popular Thai television soap opera, Khunchai Puttipat, part of the Suparbburut Juthathep series, which tracks the lives of royal descendants of the fictional Juthathep family.James is currently studying at Rangsit University's Faculty of Communication Arts.  James was recruited into the entertainment industry by Meta Talent Management Agency founder, Charnchalard "Pik" Dhaweesap (Charnchalard Dhaweesap), who saw James' photos on Facebook and has since become his personal manager.  He won the 2013 Spotlight award, as determined by readers of the OK! Magazine. In 2013, Advanced Info Service (AIS) signed a 14 million baht advertising deal with James. James shot to fame playing a bespectacled-heartthrob in the popular soap Supap Buruth Jutathep. The young star says his celebrity status has come as something of a surprise, but insists fame is yet to change his day-to-day life.
cr http://www.sharerice.com/index.php/Jame_Jirayu_Tangsrisuk Oh great he has a thread!   Hope to see more fans of him around. Not a lot of us here.
I

What is incorrect can you please mention?

James Ji, my "Bitchy P'ek"!!! Love you. So glad he has his own thread now. Thanks Step.

:highfive:  YAY! If only we could have more fans spaz around here. Kyaaaaaah To celebrate this momentous event, I give you, the "bitchy faces" of James Ji.

LOL. This makes my day. JJ bitchy looks. He's just too adorable. I wish there are more spazzlers as well.

Well, in Neung Nai Suang, he was bitchy 90% of the time but he was most handsome for me in Episode 1 where he was fighting with Poom at their kitchen.

But my favorite bitchy moment ever of James Ji was in Episode 3 of Puttipat where he and Kaew talk for the first time and he tells her off (says something about him understanding that her job depended on her thighs so he'd do her best). He was about to leave but then he turns around and looks back at Kaew with such a bitchy expression.
(cr: Miniezmin)

His best bitchy looks are from Ruk Sudrit in my opinion.

OMG NONG! I was planning to watch Ruk Sudrit after NNS ended so that I wouldn't be lonely when he goes training in Japan and disappears or until Padiwarada airs. And then I started writing that fic and I said I can't watch Ruk Sudrit because he plays such a bratty jerk so well that I might not be able to imagine him as a kind and soft hearted nerd. but then I just watched episode 14 of Ruk Sudrit, I DIE.  :cry:  :cry1: That scene where he smiles while crying (much like that scene in Timeline where he smiles with a broken heart.) GAAAAAAAAAAH my heart broke. He's so good at doing that, apart from his bitchy looks. That's why it's fun to see him SUFFER SUFFER SUFFER (though deep inside I end up suffering too. My poor baby!)

LOL. Yeah. I cried so much and laughed so much watching Ruk Sudrit. You should definitely watch it when you have time. At first I wasn't going to watch it because a lot of people say it was a fail, but then I couldn't resist how cute JJ and Punch looked in the pics so i ended up watching it and loved it.
S

I read it in an interview of his before NNS aired. I think he's just finishing taping of Padiwarada then he's going to Japan for "training" again. (2 months if I'm not mistaken). I'm not sure but I think they discuss it here:

You know what, before, I really hated his manager for exploiting him and making him do endless work, then making him do concerts and go abroad for training and all that. But after I thought about it, I realized there might be some logic to it. I think his manager is giving him time to grow and learn more things until his face "matures" or at least until he gets offers where he gets paired up with a leading lady who at least looks close to his age. It's bad both for him and the girl whenever they get paired up and the girl gets criticized for looking too old for him, or him being too young for her, etc. Also maybe they'd train him to sing better? (not that Japan is the best place to study music . Johnny's Junior, nuff said. )  I dunno. Whatever it is, I hope the kid gets a vacation, or less hectic work when he goes abroad. His schedule is crazy.
S

Not too long he went to Korea :shrug:

Uhm... I'm freaking out a bit. I realized that James Ji's new haircut makes him look a lot like my crush 10 years ago, Korean actor Jung Woo Sung:

Jung Woo Sung
Exhibit B: in the movie "Beat"  when he was just 24 (Cr: Shinehyeon IG) 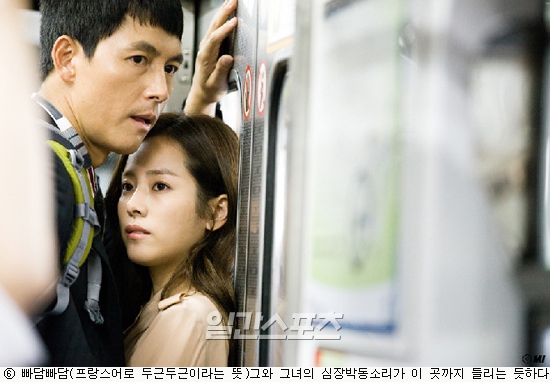 exhibit D: I think this is still from Padam Padam. It's THAT HAIRDO! (Cr: TBS)

Is there anyone who translate JJ's articles on IG or FB??