woa ho... that doesn't look too comfortable, or easy.

Who's your daddy? Just kidding (SRK, Rani, Priety and Priyanka)

are they in a movie together too or wat?

It's for their upcoming movie "Jaaneman" staring Salman Khan, Akshay Kumar, and Priety Zinta. The director is Farah Khan's husband, I don't know his name. Sorry. I think the movie is set to premier next year.
K

Sorry, not too sure what the storyline is for this one. I just know that it's gonna star Priety, Akshay and Salman. Seems like a love triangle movie with a metro setting.

aww she like one of my fav actress
E

She's good to look at. Her acting is all right--having seen enough of her movies to say anything else.
S

Yeah...Preity does look like she's pregnant. Oh wow...so Salman Khan's in there too? Hrmm...interesting. I don't think I would watch it though.

thanks for sharing, those outfits in that last pic are gorgeous! i like preity's the most ^^ 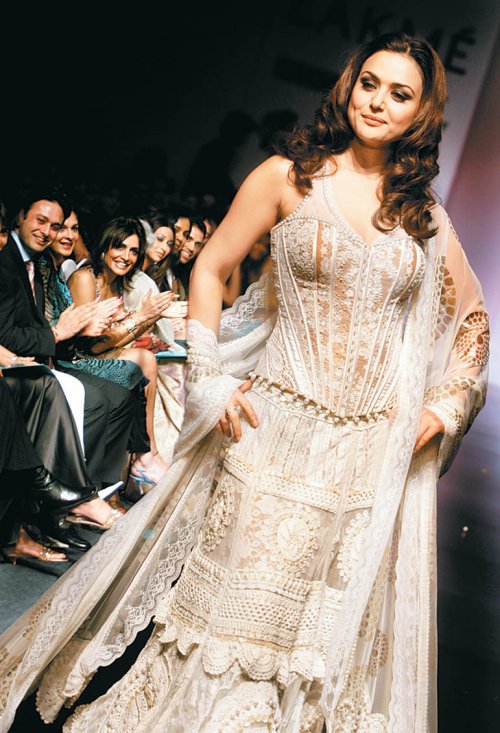 This is not a still from any of Preity Zinta’s upcoming movies. This in fact is an exclusive picture of Preity Zinta’s first ramp walk at the Lakme Fashion Week. Preity was roped in by Manish Malhotra to carry his creation on the ramp and add a special flavor to the show.

Preity Zinta had modeled for few ads before she began her career as an actress but walking on a fashion ramp was something she had never tried before. Manish however, persuaded the bubbly actress, who took the show by storm. Preity was seen wearing a beautiful sexy corset matching with an equally stunning beige lehenga. Manisha definitely scored there.

Also, seen in the background are Ness Wadia, Queenie Dhody, Karisma Kapur and Tusshar Kapoor cheering Preity while she does her walk.

preity looks beautiful in that dress....but seems like she gain a bit weight....
J

I think they only lose weight when they have to shoot revealing scenes. Most of the pics I've seen of them on regular days show them to be a bit more human. I like that about them though, they're really outspoken and confident even though they're not stick thin like most supermodels.

wow! everything about this gurl, she's damn sexy and hot!!!
L