Neighbors Expose Prang Kannarun for Driving Recklessly and Not Apologizing

Neighbors Expose Prang Kannarun for Driving Recklessly and Not Apologizing 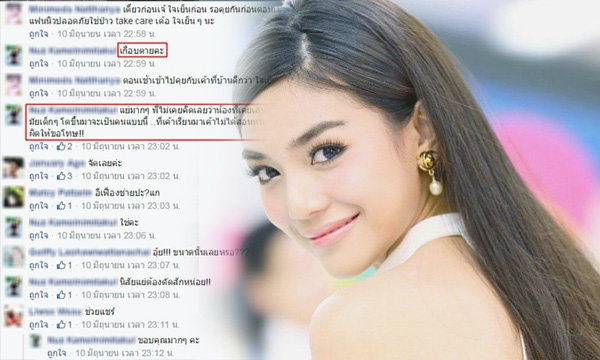 Prang Kannarun or "Mae Feung" is making headlines today. Posts on Facebook were made to reveal that Prang was involved in a hit and run. She never came out to apologize.

Actress Prang Kannarun is currently being put on blast by a Facebook user who claims to be her neighbor. The user claimed that Prang drove recklessly and hit one of his relatives who is currently injured. Prang never came out to apologize after the incident. The user said that after Prang hit his relative, she quickly avoided them and walked into her home. 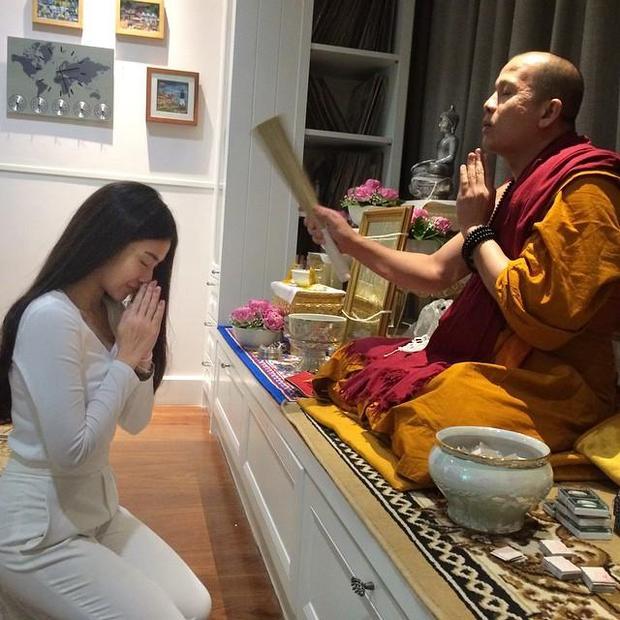 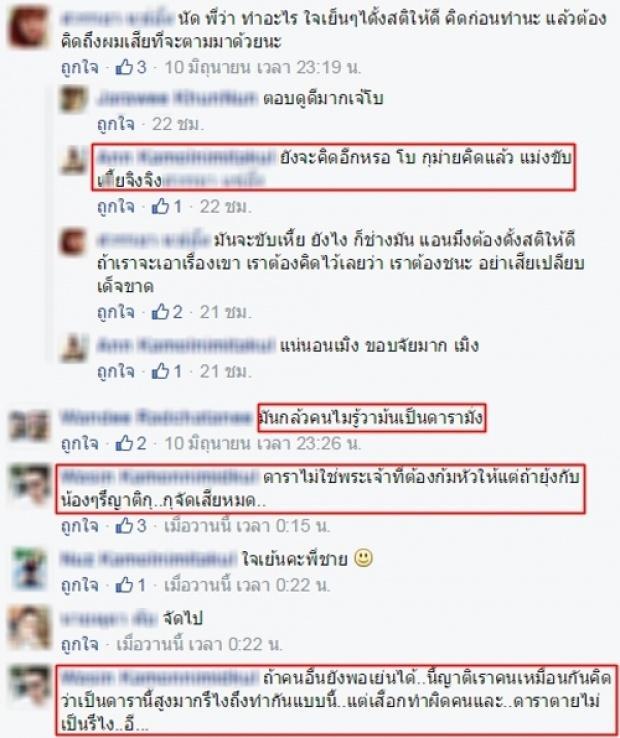 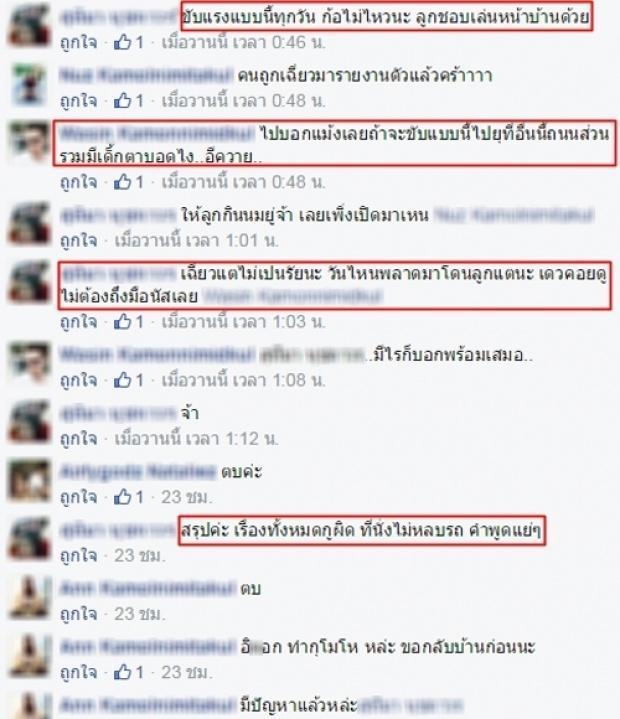 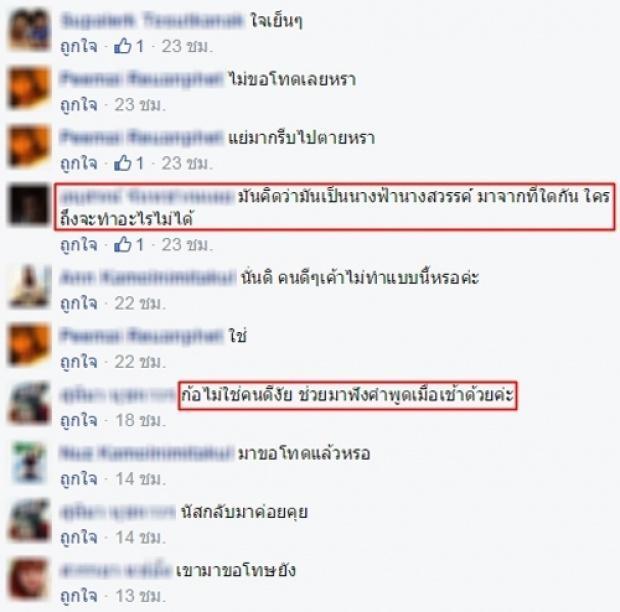 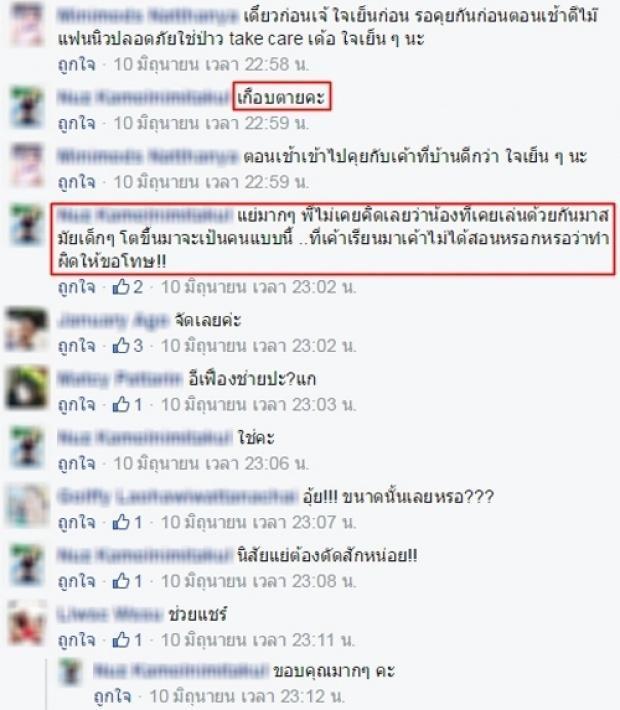 I saw the news yesterday and prang said the neighbor said she was almost hit. That is a bit far from GETTING hit and was seriously injured lol. Well i think they should force that person to come out and show that she isn't injured because it is a serious accusation. The people need to see that prang was telling the truth and not bribe the neighbor to keep quiet afterwards. If it was me and someone said this to ruin my name when i'm just rising, i would sue or report it to the police for false accusation.
R

The neighbour claimed that Prang almost hit them to the point where they almost died but when Prang asked her mother to check on they said they were okay which was contradicting to their FB status. Prang says that if she felt she hit someone, she would come out right away to apologize but that wasn't the case that day. There's no reason for her to hide away because they live so close to each other. Hopefully things get resolved quickly.

How did this person almost get hit by Prang's car? Was he/she in the streets or in Prang's driveway? Haha.
R

That's what I'm wondering. I'll assume they were walking on the streets while Prang was driving her way back home. Prang responded to the fans on IG saying "mai roo seuk loey"  which I take it meaning she was aware that the neighbours where in close proximity but in no way did she think that she hit them or anything which is why she's confused about the accusation.
N

I saw another interview that got me going hmmm. Question is did Prang see the pedestrian? If she did and almost hit her then she should apologize. Even if the pedestrian was not hit, they still have the right of the way. An apology would resolve everything. However if Prang didn't even see or even realized she almost hit someone then it is excusable. Awareness is the first thing people should have once they step inside of a car.

Read one of the comments high lighted above and it said Prang always driving fast, feel very nervous because her/his son or daughter likes to play in front of the house too.

As a driver, we always have to pay attention to other cars and especially pedestrians.    I really like this sign putting on the yards near my neighborhood.  It said,  " Drive like your kids live here. "

I don't know about Prang situation, but it is good to have harmony with your neighbors.

Staff member
Even if the pedestrian was at fault, the driver will mostly always get the most damage or is the one at fault, because pedestrians always get right of way.  That's why it kind of sucks being a driver sometimes, because it ain't your fault... but it's your fault too.  It's a complicated matter.

It's a good thing she didn't hit the driver?  But she should be more cautious in the future to come when driving.

I I like Prang I don't which side to believe but yes, drive slowly everyone and carefully

I saw multiple articles on IG and wondered what they were all about. Thanks Mahalo for the translation

there's 2 sides to the story and theirs the truth...pedestrian has the right of always...but it shouldnt be always...cuz sometime Pedestrian are just A-holes! Prang is ONLY human....or if this is a petty thing...humans are complex like that hahaha
M

Prang cleared things with her neighbor already. She had camera footage to prove it too that she didn't hit anyone. She invited them over to discuss the matter during her day off. They've known each other since they were young and never had a problem until now. Prang isn't going to take legal actions. She just wants him to erase his status so that people don't misunderstand her.
http://news.sanook.com/1813463/
N

That's good then. Did she show the footage?
M

Ncmeowmeow35 said:
That's good then. Did she show the footage?
Click to expand...

She only showed the neighbor but not the reporters.

What kind of car she have ? I know my tattoo artist drove a 2014 BMW & his car have black box & camera & everything ! I'm too cheap to buy expensive car lol but it was sweettt to be in one.
N

She should show the reporters to completely clear her name.

My car has cams too, brother made me get it.
M

Not sure whether  they were footage from cameras for her house or car. I think it should be the house.

It have to be from a car , I watch kdrama they say so lol

sarN said:
It have to be from a car , I watch kdrama they say so lol
Click to expand...

Thanks for making me laugh for the first time today.. LOL

sarN said:
What kind of car she have ? I know my tattoo artist drove a 2014 BMW & his car have black box & camera & everything ! I'm too cheap to buy expensive car lol but it was sweettt to be in one.
Click to expand...