Rani is TOTALLY #1 because she has improved over the year!

Love her so much! :sweat:
M 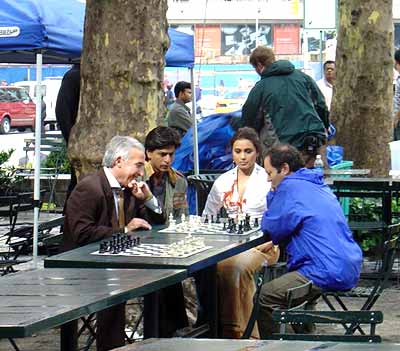 Ana, did u really see Rani and Sharuk?
Click to expand...

^lol, it wasn't Ana who saw them, go and read the first post again.

how old is she bcz she looks old. i mean...she looks like a young-lookin 35 year old. im just wondering.

doesn't look bad at all!

wow is pretty but it true she is getting a bit old...

i don't know which one to choose because they're all very pretty...

Ash all the way...she's soo beautiful..got this unique feature about her....
J

i can't really make a judement on this! it's hard! LOL! umm... i like all the fours and i watch their movies so to me they're equally sexy!
L

I think Aish is better she is charm and sexy ... She is miss world .. She is too preety
O

Itâ€™s a closed chapter for me,â€? says Amrita Rao on the news that Esha Deol slapped her on the sets of Indra Kumarâ€™s Pyaare Mohan. Amrita Rao had commented on Esha Deol in front of the director and the entire unit while shooting for the film Pyaare Mohan. Esha seemed to have overheard the comment and in a fit of anger, slapped Amrita Rao in front of everyone. Speaking about the incident, Amrita Rao says, â€œItâ€™s unfair to blame her but I donâ€™t want to say anything more.â€?

Amrita also refutes charges that were made against her about not being happy with the promos of John Matthew Mathanâ€™s Shikhar. â€œI was totally misquoted. I am shocked that they have written about it. Why would I be unhappy with Johnâ€™s film? I signed the film because I am a great fan of director John Matthew. His first film Sarfarosh made a huge impact on me. I signed the film because I wanted to work with him. John is a gem of a person,â€? she says.

Speaking about her two films, Vaah â€” Life Ho To Aisi being directed by Mahesh Manjarekar and John Mathan Matthewâ€™s Shikhar both with Shahid Kapur as her co-star. She says, â€œVaah â€” Life Ho To Aisi is a fantasy film where I play a teacher to a few kids. Itâ€™s a romantic and fun loving role, whereas Shikhar is about a typical Indian girl who becomes mature because she takes on a lot of responsibilities.â€?

About Shahid Kapur as a co-actor, she adds, â€œWhen I met Shahid for the first time, he was a very dedicated star and wanted to prove himself. Three years down the line, he has created an audience and space for himself. Shahid Kapur is the most comfortable co-actor to work with.â€?

Time to get choosy: Kareena Kapoor

Kareena Kapoor who has done about 30 films in her four year film career, has decided to become choosy about her roles.

''I have decided to work on my own terms and conditions and not do films just for the sake of it. I have done enough run-of-the-mill roles and now I am going to do stuff that excites me professionally,'' Kareena whose next release Dosti - Friends Forever will be released on December 23, told a news agency in Mumbai on Saturday.

Kareena said she has signed Vishal Bharadwaj's 'Othello', an adaptation from Shakespearean work, wherein she plays the main female character of Desdemona.

''The film will be based in Uttar Pradesh and I am so excited that Vishal thought I would do justice to the role. Desdemona is one of the most challenging characters an actress can play. It is an honour and dream come true to be the part of this project,'' she added.

Kareena will be seen for the first time with actors like Ajay Devgan , Saif Ali Khan and Naseeruddin Shah . The film goes on floors on January 15.

Failure of her recent films like Kyon Ki and Bewafaa did not bother her. ''Why point these two? There are more than ten,'' she said.

According to her, 'Kyon Ki' failed because the audience did not want to see a sob movie during Diwali, while 'Bewafaa' looked like it belonged to the 60s with a bold theme.

''I think Priyadarshan will stick to his genre of comedy as Garam Masala and Hulchul were. Both the films did extremely well,'' she added.

Speaking about 'Dosti', she said the film was an out to out Akshay Kumar film. ''I did it because of Sunil Darshan, who is a friend of mine and known to me even before I became an actress. The film is about two friends and how one of them (Akshay) sacrifices his love (Kareena) for his friend's sake,'' she added.

''Four years in the industry and 30 films is just too much, I think I have decided to go slow and do few very good films where I have meaty roles,'' she said.

haven't been in here for a while...but anyways..yeah there's always a time when actors and actresses starts to get choosy about their roles in movies...it's just sad that they don't do that from the beginning. They enter the film industry and take a role in whatever they can get just because they want to be doing something. However, those roles are never the kind that they wanted to be seen in as in the first place...it's a pity that they have to wait this long to realize that doing a movie after a movie is not what they want.
You must log in or register to reply here.
Share:
Facebook Twitter Reddit Pinterest Tumblr WhatsApp Email Link
Top